Rarely Anywhere, consistantly The Sky Islands and The Moonlight Cove.

Free to Use, with credit.

'With any amount of luck, we'll be able to find it's hoard...' - Slimepedia

The Dragon Slime is a rare slime that has a fiery breath an an attitude to match. It spawns rarely anywhere, but often in the Moonlight Cove and the Sky Islands. It favors Scorched Hens,

The Dragon Slime dines exclusively on meat, and has a strong favorite for Scorched Hens.

Dragon Slimes love Lava Lumps! They can watch these mini volcanoes - and the tiny flames they spit out - for hours.

Dragon Slimes are rare and whimsical beasts, that spend most of their time soaring through the clouded expanses of the Sky Islands, or lurking in the dark caves of the Moonlight Cove (Though they are known to pop up randomly else-ware and cause trouble!). Widely considered beautiful and fascinating, these slimes are often sought after by ranchers for their valuable plorts, however these slimes can be difficult to upkeep.

Unlike the vast majority of their slimy cousins, Dragon Slimes share lots of traits with their reptile cousins down on Earth - they are often solitary creatures who dislike being held with too many of their own, and they require shade to properly function (Though they need no warmth from the sun. You can probably see why...). On top of this, their favorite food (The Scorched Hen) isn't even naturally occurring, and therefore hard to harvest. This makes them a challenge to keep, and an even harder challenge to keep happy.

While beautiful, Dragon Slimes are also deadly. If not fed properly, they are vastly aggressive towards ranchers, and - when hungry enough - other slimes, especially those made up of water or ice components. This aggression is often acted out by a searing hot breath of flame, or simply a sharp bite. Even when the slime isn't being aggressive, their bodies are hot to the touch and you'll burn on contact. Worryingly enough, this trait is shared by their plorts, so caution is advised when managing them.

Their ability of powered flight also means that, when the temptation arises, it is a lot more difficult to keep them in their corals than it is a regular slime, and a lot easier for them to reach coops, resulting in stray plorts and possibly deadly consequences...

Dragon Slime plorts are widely used in thermodynamics, and the creation of heat related power sources. Alongside this use in industry, they're often sought after for heat back on earth- a dragon plort makes a good centerpiece for any fireplace, and it'll keep the whole house warm for weeks to come.

Dragon Slimes are mostly green, reptilian looking slimes. However, they sport a deep, fiery glow of orange and yellow, that spreads to the coloration of their reptilian wings and the spikes that adorn their back down to their tail (plus an arrowhead tail!), not to mention their tongue. On top of all that, they have naturally slanted eyes with slit pupils, and a pair of sharp fangs.

While this is their main appearance, the Dragon Slime has a few alternate skins, which are detailed bellow. These are free to add to! Just add a new column to the table.

Here's a small list of tips and tricks that would help in the keeping of Dragon Slimes.

Here's a few little bits of trivia based around the Dragon Slime! 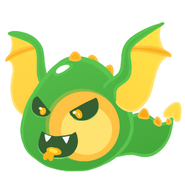 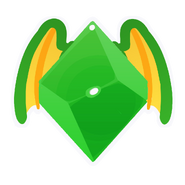 Add a photo to this gallery

Digimonmaster 999
Add a photo to this gallery
Retrieved from "https://slime-rancher-fanon.fandom.com/wiki/Dragon_Slime?oldid=103426"
Community content is available under CC-BY-SA unless otherwise noted.